During the 1970’s, Chicano/Mexicano communities, (as well as the Native American communities) began a spiritual, cultural, artistic and political reconquest of their ancient American heritage. Everywhere, the young began to inquire from the old as to what had been their traditional ways. The Chicanos of San Diego, like many others throughout the Southwest, began to realize the great value and antiquity of the culture they had inherited from their parents and their elders. Music, poetry, mural painting and jewelry-making flourished within countless Chicano cultural centers of Aztlan, the newly rediscovered ancestral homeland of the Chicano/Mexicano peoples.

Perhaps the most visible, emotion-charging art to be rediscovered was LOS BAILES REGIONALES (the regional dances), the traditional Mestizo (mixed blood) dances of the many regions of Mexico. These “Ballet Folkloricos” unabashedly and colorfully expressed the dynamic vitality of the heritage brought to Aztlan by the Mexican immigrant.

While many young men and women rushed to learn these beautiful expressions of Mexico’s complex ethnic past (the mixture of European, African and Asian with the Indigenous continues today), many felt a deep inner need to rediscover the Native American heritage of Mexico. They wanted to become a part of the Chicano/Mexicano’s living heritage that predates the “Hispanic” or “Latino” identity forced upon them by the dominant Euro-African-American culture.

Many Chicano/Chicana college students journeyed into Mexico to discover their own family’s lineage and ethnic ties to the hundreds of Native populations that still live and prosper in Mexico. It was in this time of rediscovery and yearning for the Chicano’s ancient ways that a small, dark man of noble bearing arrived in San Diego, California. He was to change the self-identity of the Chicano people forever. 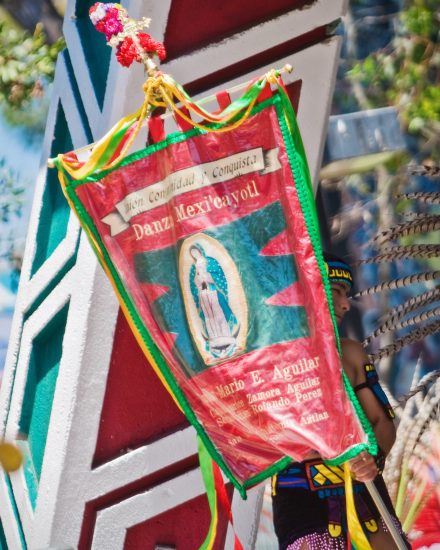 In 1974 Florencio Yescas, an elder from the Aztec communities of Mexico City, brought the Azteca dance tradition, first to San Diego, then to the rest of the U.S. He taught a small group of young men the ceremonies that give the Azteca dance tradition its great spiritual strength. This tradition has as its central focus the role of a dancer as a spiritual warrior who must defend his/her community from darkness (oppression, ignorance, fear, poverty, violence and self-hate). The Azteca dancer must “sacrifice” himself for the good of the community. This sacrifice is carried out through works of education, art, and social justice. 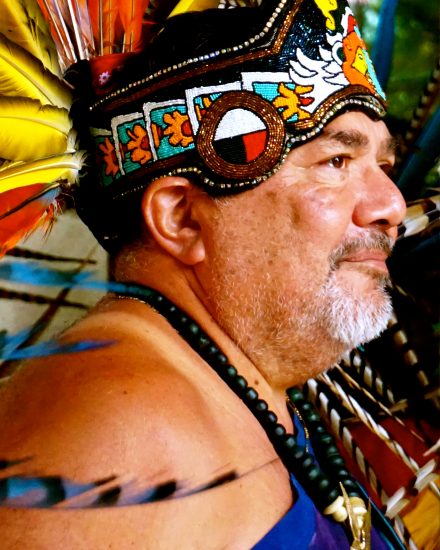 On Dec. 12, 1980 Mario E. Aguilar Cuauhtlehcoc, then 26 years old was given recognition as the first CHICANO Danza Elder, or CAPITÁN. Even at that age, he had proven to his maestro and elder, Florencio Yescas, Danza Conqueror of AZTLAN that he was serious and ready to take on this great obligation, and fulfill his duties. Florencio Yescas never received recognition in Mexico as an elder. But by his force of personality, and his great friendship with many of the elders of old family lines, he was considered to be a Capitán by many danza elders and dancers. This gave him great influence and respect in many dance circles and ceremonies.

At the request of Maestro Florencio, many traditional elders who were held in the highest esteem in Mexico gave Mario their recognition and support. These included Florencio’s own jefe (leader) Manuel Pineda, Generala Juanita May and her daughter Rosita Maya, General Felipe Aranda, Los Hermanos Placencia, Capitán Miguel Avalos, Eladio Aguillon, and others. This historical event was witnessed by fellow Toltecas En Aztlan members Bea Zamora (Mario’s wife), Guillermo Rosette, and Felipe Rangel. Temoc Mosqueda, who now teaches in Colorado was also a witness. This is why for many Chicano groups of La Danza Azteca, Florencio Yescas (as well as Andres Segura Granados) is considered a “Conquistador” (a conquerer) of the Chicano Nation, and a General of La Danza in Aztlan.

Since that day in 1980, Mario, his wife Bea, and the members of Danza Mexi’cayotl have dedicated themselves to teaching the spiritual, artistic, linguistic and political aspects of Azteca, Mexican and Chicano culture. Because the focus of the group is FAMILY, all of the children, from the moment of conception are completely involved in all the artistic and ceremonial aspects of the ancient danza tradition.

The work of teaching and preserving the Azteca dance tradition has been carried out at churches, schools, universities, recreation centers, and local Indian reservations. This has been accomplished through dance presentations, slide lectures and cultural workshops. By supporting the efforts of San Diego’s local Chicano and Native American organizations and communities, Danza Mexi’cayotl is helping to empower people to create true self-determination, with an emphasis on the preservation of Native American ‘s rich and unique cultural legacy. Thus, in 1987, the families of Danza Mexi’cayotl incorporated their circle into the Mexi’cayotl Indio Cultural Center, a California Non-Profit corporation. In March 1993, MICC received 501(c)(3) status from the Internal Revenue Service.

With the help of various grants from the California Arts Council, the City of San Diego Commission on Arts and Culture, San Diego Gas and ElectricThe James Irvine Foundation,, The San Diego Community Foundation, The Barona Indian Reservation Tribal Council, Target Stores, and the Fund for Folk Culture, The Mexi’cayotl Indio Cultural Center has been able to accomplish many things, including the publication of several books, as well as performing throughout California, Arizona, New Mexico, and Central Mexico.

We are community residents, parents, artists, teachers, and counselors who dedicate our lives to diversity and social justice. We work and pray for the cultural, spiritual, ecological, economic and political floresence of our future generations.